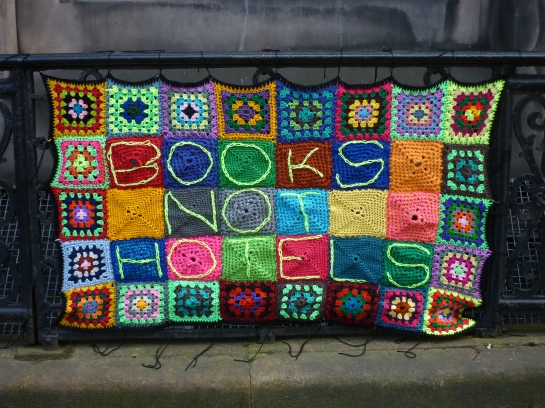 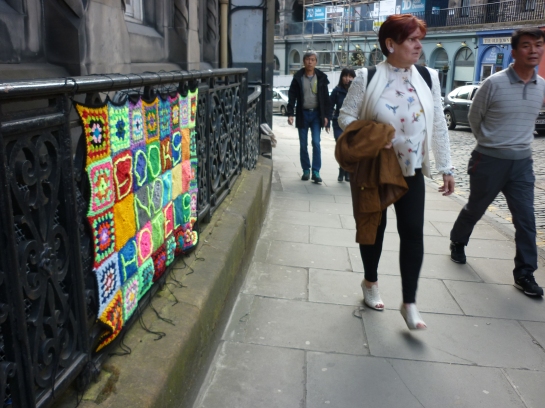 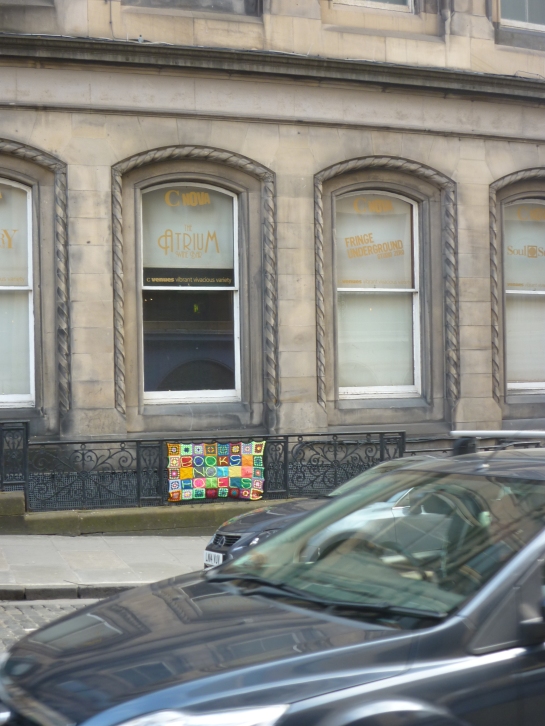 On Wednesday the Planning Committee  of Edinburgh Council will consider a slightly revised plan by the developers. This is a stunning building the site of which had been kept to expand our beautiful Central Library and now looks likely to be sold for more cheap hotel accommodation. This is supposedly a UNESCO City of Literature ! ha! Simon Byrom a local planning activist has put this all better than me so I’m going to copy his email below. In the meanwhile go here to see my pics of the interior of the building when it was a tempoary gallery space.

Do come to the demonstration on Wed 9.30am outside the City Chambers if you are not working. Otherwise please circulate these petitions and write to the councillors below. THANK YOU THANK YOU  THANK YOU !!

Dear Supporters of the petition “No Confidence in the City of Edinburgh Planning Department”, it is with a heavy heart that I relay details concerning the latest ‘development’ controversy relating to the India Building’s application.

The local community have just learnt that Historic Environment Scotland (HSE), the government heritage body, have withdrawn their objection to the ‘development’, in response to the revised plans, claiming that the “proposals do not raise issues of national significance“, recognising that the revisions to the original plans “have attempted to address some” of the concerns of the original application.

Yet while HSE considers that the “proposals do not raise issues of national significance” they note that theCouncil “may wish to investigate further the effect development on this site will have on the Library, specifically on light levels”, which as stated in their original objection is recognised as “the finest Carnegie library in the country”. SURELY THIS MERITS “NATIONAL SIGNIFICANCE”! Were the library a Category A listed building this could have completely changed the position of HES. However, as revealed in their original objection:

example of a Carnegie Library in Scotland, and one that should be upgraded to

Category A. We note your Council has also endorsed this view. We have no reason to

disagree with the LDN assessment, and will consider its merit as part of our

assessment of the current proposals.”

“the overall impact of the development on the outstanding universal value of the World Heritage Site remains, in our view, broadly neutral”.

Yet, in spite of the universal significance of World Heritage and the responsibility of safeguarding its value for the benefit of humankind and succeeding generations, and in light of the outpouring of articles in the national and international press regarding the raft of ever expanding controversial planning decisions such as Caltongate, Craighouse, St Andrew’s Sq, St James Quarter, Quartermile… etc which have led to the creeping encroachment of speculative architectural wallpaper veneered ‘development’ which has elicited the alarming recent visits of ICOMOS, the UN’s heritage watchdog, HES and EWHT have effectively given the green light to the proposed India building’s ‘development’.

This means that the ‘developer’ has overcome a major obstacle since had the HES objection stood the application would have been called in by the Scottish Government regardless of the impending Council decision which is to be decided next Wednesday 25th May.

The planning department has now consequently recommended APPROVAL for the ‘hideous’ hotel and given the recent track record of the Council, and how compromised and  perverted by economic considerations it has become, it might seem like a fantastically hopeless cause.

Yet given the relentless speculative, gentrification process that has been allowed to take place in recent years, running roughshod over the City and her Citizens, it could be said that the very future of the Old Town community, at the heart of the Nation, and its World Heritage status now hangs on the decision next Wednesday, so the voice of all the supporters of this petition is ESSENTIAL if there is to be any faith left in this democratic process!

This Council made a pledge at the beginning of its term in 2012 to “listen to, and work with, local people” yet there has been ZERO public consultation to pursue alternative uses for the precious public assets implicated with the proposed India Building’s ‘development’.

Moreover, in spite of the Council recognising that “there needs to be strong process for looking at the quality of how the Council has reached decisions so that there is genuine scrutiny and questioning of the actions it has taken”, the deal to dispossess the public property of the Cowgate, as an essential part of the proposed India Building’s ‘development’, has been stitched up ONCE AGAIN BEHIND CLOSED DOORS, like most, if not all of the valuable property featured on the Edinburgh 12 ‘initiative’, including the jewel in the crown, the Royal High School, perched at the foot of Calton Hill, overlooking the majesty of Arthur’s Seat. And like the rot that plagued the Caltongate (New Waverley) debacle, where is the tendering process that otherwise defines the precious, though utterly discredited, psychopathic ideology of the free market which is supposed to ensure ‘best value’?

We’ve been presented with ONE VERY MEDIOCRE option in consideration of the proposed India building’s ‘development’. With a little scrutiny it is evident that this is quite disgraceful.

So in this City of Enlightenment and Literature,

“Rage, rage against the dying of the light” – Dylan Thomas

For those who have have been following this debacle you will know that the publicly owned land at the rear of India Building’s is due to be sold if the Council grant planning permission for this massive ‘hideous’ hotel ‘development’ next week.

To lose such a precious piece of public real estate to such a shamelessly speculative, insensitive and mediocre piece of architecture, and in this the Year of Innovation, Architecture and Design, when it could otherwise be used to benefit the Central Library to develop further the vision of Scots born Andrew Carnegie, whose philanthropic endeavours gifted over 2800 libraries throughout the World, would be a terrible embarrassment and insult to this city of Enlightenment and Literature, to add to the creeping plague of soulless architectural wallpaper which is putting the credibility of the World Heritage Status at such risk.

Though some have come to regard the World Heritage Status as a curse, it is a reflection on the glorious achievements of the City’s guardians of the past, which in the spirit of Internationalism has come to be viewed as a universal treasure. Though the City still manages to achieve the highest plaudits on the World stage, in spite of its pot holes and grime, if this trend of disregarding Citizens and acquiescing instead to the interests of predatory capital, which in a global market has no heart and true loyalty, is allowed to continue the reputation of Edinburgh will be ruined, and with it the wellbeing of future generations betrayed.

The importance of this land can hardly be overstated, as championed on the petition, were it to be used to advance the vision of Carnegie in the 21st century and arrest the fortunes of the public library service across the country, and indeed the World, which has so otherwise become a victim of so called ‘austerity’. Indeed a recent Guardian article claims that over 300 libraries have closed across the UK since the chicanery of the global financial ‘crisis’:

If the current owners of the India Building’s who wish to pursue this speculative ‘development’ had regard for this city they would relinquish their bid for this land. Yet not only content to acquire this precious public resource they’ve managed to include the Cowgatehead Church property into the deal. This well used public building which has served the community for many years, specifically attends to the most needy and vulnerable in the Old Town community, and in a recent article published in the Herald it is claimed that the loss of this significant service “could lead to more deaths, mental illness and a soaring numbers of rough sleepers“:

While there may be those who lack sufficient insight, sensitivity and empathy to care, particularly those who don’t know the area well, there are many in the local community who would rather contend with a few humble homeless souls than a plethora of soulless hotels and rowdy bars catering to party revellers who regularly trash the place.

In reflection, this process of asset stripping public services and public property, in this rotten Age of Austerity and Endarkenment, reveals that in spite of us supposedly all “being in this together” the rich continue to get richer by feeding off the poor. Such a wicked, parasitical system has no place in a so called civilised, democratic society, and those who support or preside over such an ideology should have no mandate to serve.

The predatory speculative ‘developers’ who have been busy making plans in the City have shown themselves untrustworthy. Indeed our elected representatives and public servants must now surely realise that these companies cannot be trusted to care about Our heritage. Perhaps the greatest example of this is the scandalous matter of South St Andrew’s Square where in an act of gross vandalism no less than THREE listed building were recently demolished with complete impunity. Then there is the case of the crumbling MacRae tenements of the Royal Mile, acquired in the shameful asset stripping “not-hideous-enough-to-refuse-planning-permission” scandal of Caltongate/New Waverley.

So in light of all this, in order for Common Sense and decency to prevail, it is imperative at this 11th hour that Citizens raise their voices to the ears of public servants.

In the first instance please write to your elected representatives ASAP who can be contacted via:

If you have a councillor in your ward who sits on the committee who will make the decision next Wednesday (Development Management Sub-Committee) please contact them directly. Even though their primary duty is supposed to be to the City and her Citizens they are not actually allowed to state a view BUT THEY CAN HEAR YOUR OPINION! These councillors are:

You may also wish to take up this matter with the Governance, Risk and Best Value Committee who meet the following day on Thursday 26 May, though it is more important to target the Development Management Sub-Committee since if they rubber stamp the deal it could be too late to challenge the decision. The councillors who sit on this committee are:

Even if you don’t have a councillor who sits on these committees please write to your councillors anyway since they can lobby respective councillors.

Besides elected representatives please also CC into your correspondence the CEO of Historic Environment Scotland and the Director of Edinburgh World Heritage Trust:

Besides the details above and that included on the petition:

you might like to mention that the late submission of an official Environmental Assessment report by Andrew Campbell, Environmental Assessment, Services for Communities, recommends that planning permission for the proposed India Building’s hotel be REFUSED. This tallies with the Air Quality Management Area data for the area, which due to the relentless over-burdened encroachment of commercial interests on the area now breaches EU regulations:

If you are able please come to the City Chambers next Wednesday for 10pm, with banners if possible, to show support for the Old Town community in resisting this appalling proposal.

Also the community are having an event this Saturday to raise further awareness and gain greater support:

11.30: Photoshoot gathering outside Central Library followed by walkabout of area.

12.30: Picnic at Greyfriars Kirkyard (or Grassmarket Community Project if weather is poor). Bring food and drink to share!

After lunch: Gorilla gardening, litter picking, banner making and leafleting at the Cowgate site. Bring along materials if you have any to spare.

Thank You so much for your support.

For the Love of Our City,

“As soon as the land of any country has all become private property, the landlords, like all other men, love to reap where they never sowed, and demand a rent even for its natural produce” – Adam Smith